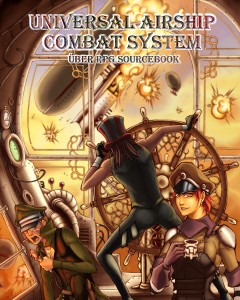 An expansion for the Über RPG: Steampunk Ruleset, this Sourcebook is intended to be used both as a Role-Playing-Game supplement  and also as a stand-alone miniatures combat and campaign system.  It provides an easier, faster paced large vehicle combat system for characters in a role-playing setting, while also providing new guidelines for characters on an airship or using steam-powered Anthropomorphic Mechanizations (“Steam Mechs”).

Universal Airship Combat System is ideal for any Steampunk campaign.